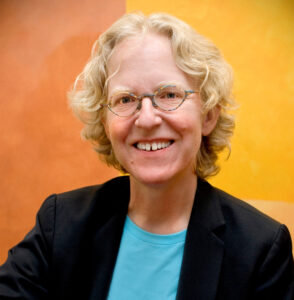 I was born in Cleveland, Ohio in 1957 and grew up a suburb called Wickliffe.  My father was a mechanical engineer, and my mother raised four children while also providing substantial lay leadership in our church, being an active member of the League of Women Voters, and in the founding of a branch of the Cleveland Human Rights Council.

I moved to New York in 1980, after college. I got a job in a library in what was then the Center on Welfare Policy in Law, one of the national Legal Services support centers at that time.  I also worked part-time at the Village Voice as a research assistant to Jack Newfield and Wayne Barrett.  My first long-term apartment in Brooklyn was a lesbian group household on Third Street in Park Slope.

Connections made at the Voice led me to working for City Council President Carol Bellamy, developing policy positions and budget proposals, and writing speeches for her on alternatives to incarceration and women’s issues generally.  Though she lost her race for Mayor in 1985, David N. Dinkins was elected Borough President of Manhattan and I was recommended to him for the staff he was assembling.  I continued to do the same kind of work for him and am most proud of supporting his leadership in fighting HIV/AIDS during that period in history.

When Borough President Dinkins announced his run for Mayor, I was put on leave from my city job and worked on the campaign.  When Mr. Dinkins was successful, I was appointed to the position of Deputy Director in the Office of Management and Budget for the Health and Human Services agencies.   It was a special privilege to serve in his administration, and to work with so many others who had a strong commitment to public service.  Most memorably, I was part of a team that created the Primary Care Development Corporation.  In service of the Mayor’s commitment to the ideal that everyone have a primary care doctor, PCDC was created to finance the renovation and building of primary care facilities.

When his Mayoralty came to an end, I became the Project Director of HIV Care Services and the Medical and Health Research Association. This Project managed the federal Ryan White ACT grant to New York City.  The grant had just doubled to a total of $104 million annually.  My job was to build the organization’s capacity to manage a grant of that size, as well as support the grantees and their success.  Many were community organizations that were created very recently to respond to the pandemic in their communities.  In this role, I was committed to building a culture of partnership with the grantees.

I became Executive Director of the YWCA of Brooklyn just after 9/11 during a period of financial instability there.  Griot Circle was one of the YWCA’s non-profit tenants.  I’d met Regina Shavers earlier, when she was at HRA and active in DC 37.  The YWCA was in terrible financial straits, and I was responsible for making changes in the business model that would prevent the YWCA from closing down completely and make it financial sustainable.  More than one-third of the YWCAs nationally have closed in the last three decades.  Unfortunately, the YWCA’s partnership with Griot came to an end when the decision was made to stop renting space to organizations.  I am proud that we were able to preserve and build out additional low-income housing in the building, and that the YWCA continues to be home and a haven in our neighborhood.

Community Resource Exchange then hired me as a Senior Fellow to work with non-profit leaders.  I got to know Griot again during the period of challenge and transition that led to hiring Katherine Acey.  I worked with some of the most committed and most accomplished people I’ve ever known in a variety of capacities, including strategic planning and coaching.

When Bill de Blasio became Mayor, I went back into government, working for Lilliam Barrios-Paoli.  Lilliam was still Commissioner at the Department for the Aging then and had just been appointed Deputy Mayor for Health and Human Services.  I was appointed Director of Food Policy.  This was an interagency coordination role and working with other agencies we were able to implement free lunches for every child in public schools, provide incentives for quality, affordable supermarkets to locate in underserved communities, and make it less-time consuming and more dignified to get food from a pantry when you need it.

I am now the Acting Executive Director of Equity Strategies at the Administration for Children’s Services.  I lead a new office that focuses on developing agency-wide strategies for ACS to address barriers to equity in the child welfare and juvenile justice systems for Black and Brown families, and LGBTQAI+ youth.

I previously served on the many non-profit boards including Hetrick-Martin Institute and SAGE.  Many years ago, I was a founding board member of two HIV/AIDS organizations.  One was the first organization for women with and at-risk for HIV/AIDS, and the other was a consortium of HIV/AIDS service providers in upper Manhattan.  Many years ago, I served on funding panels for the Astraea National Lesbian Foundation.